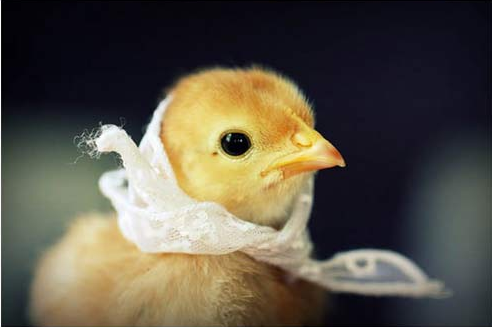 My man: the real chick magnet

In an ordinary yet romantic scenario, a husband would come home to his wife bearing a bunch of 10 roses, or tulips for the uncomplicated-sensitive types.

In my extraordinary and rural scenario, my husband comes home with a cardboard box containing 10 fluffy chicks. Plus their mother.

“The mother will have to be returned” he reassures me with a coyish tone.

After unexpectedly upping the number of our chickens from 15 to 25, one more or one less wasn’t really going to get my knickers in a twist.

But better this way, the mother is only taking temporary residence in our coop, simply until her 10 chicks will be old and tough enough to fend for themselves and peacefully cohabit with the rest of the chickens they are sharing their corral with. Then, she’ll be returned to Victor Hugo’s coop, where she originally comes from.

Victor Hugo is one of the local ironmongers. He worked on many metal related projects on our house. He’s a gentle stout Ecuadorian man, with rubicund cheeks and the sweetest black eyes sparkling in his face like shiny blueberries. He has a soft, well mannered way of expressing himself and everything about him inspires bear hugs.

When Camila was born, he promised us the gift of some chicks but then we weren’t yet ready to host any as our chicken coop was still in the planning phase of its manifestation.

But now he had no excuses and when he offered again, Fintan succumbed the Ecuadorian non-confrontational courtesy etiquette of never refusing what is offered, and home he came with this box of chirping birds.

These tiny little fluffy chicks, ambassadors of many Easter greeting cards, are now roaming around our corral, looking ever so cute, under the vigilant caring protection of their mother.

They are of a different breed to what we already have, they are generically called “finos”, which calls for an amateurish behavioural study on racism among chickens.

The deciding factor was the attack that Camila suffered from the rooster of her Ecuadorian granpa Don Lucho. During an impromptu visit at his house in town, she managed to sneak in his corral when I was busy talking to him. Upon hearing her squeal, I rushed to the corral to find her on the ground with this massive ginger rooster flapping around and over her. I quickly kidnapped her from the unfortunate incident and ran away being chased by that gigantic ginger bird looking ever so angry.

Undoubtedly, mesmerised by this new “cacco” -as she calls roosters in her bastardised Italian translation- Camila tried to pick it up as she usually does with all of her chickens, only to realise this one wasn’t going to have it. She cried and wore the scratches on her white arms like honour badges, pointing at them with laughter as we acknowledge them as marks from the naughty rooster.

We both though Gustavo, in comparison, is a saint of a cock and deserves to be addressed with a distinctive title, so Sir Gustavo it is.

Sir Gustavo waiting for the chicks to reach puberty

14 Sep This entry was published on September 14, 2016 at 4:04 am and is filed under chickens, Ecuadorian culture, Rural life, Uncategorized. Bookmark the permalink. Follow any comments here with the RSS feed for this post.

Older: With the cat on my lap, I draw. The power of honoring Mama’s could-do lists
Newer: Vagina vs Little Potato: defining genitals to my daughter