Never like this year I couldn’t care less about Christmas and New Year.

Christmas is for me the holiday dedicated to the family. Forget about Jesus being born in a cold cave (and receiving incense as a present… Ah! Talking about useless Christmas presents.), Christmas is the holiday in which family get together. And make the effort of all getting along.

My childhood’s Christmas memories are actually quite fond. Despite systematically starting off with a quarrel with mum because she disapproved my outfit choice, or my sister’s make up too heavy for mass or simply because her lasagna didn’t turn out the way she wanted because dad had bought the wrong brand of butter, Christmas would evolve to be a feast of food and laughter, eating all day long, gossiping, telling jokes and playing board games with cousins, many of whom we won’t get to see for the rest of the year.

This year though I was away from all family, included Fintan which made Christmas being totally redundant for me. The warm and sunny Ecuadorian weather luckily didn’t offer any links to the festivity as I know it to make me even feel sorry about it. Plus I did have a lovely roast with my acquired family of friends up our mountain which held the tradition in place. 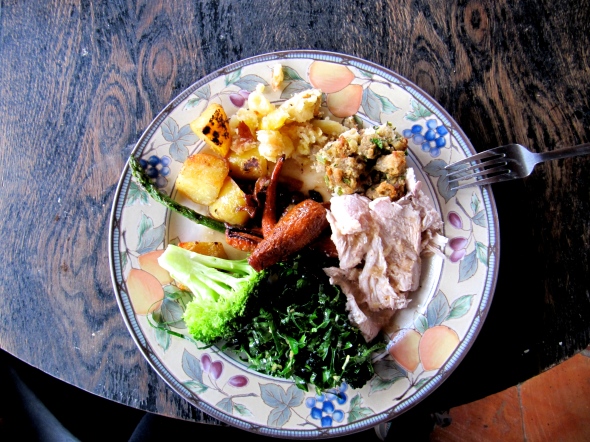 This year’s Xmas roast with friends up the mountain

I  grew to dislike the over zealous devotion to consumerism dictated by the Christmas season. In my family it was more a religion to buy presents for people than to actually think of the religious meaning of the day itself. My mum would panic because four days to Christmas day she hadn’t yet found a present for Mario. “But we haven’t even seen him this year?!” I would say. And it didn’t matter. We HAD to buy him a present. And quickly.

I hate the way the meticulous adherence to traditions would steal from logic and common sense. It’s Jesus’ birthday after all, why do I have to buy Mario a present??

That’s why this year I was actually quite happy to be removed from it all. Because as much as I don’t buy into Christmas anymore, if I am in it, bombarded by advertisement, and surrounded by people who love and venerate the holiday, the decorations vomited all over everything in the streets and houses and shops, I’d find it hard to be totally free of its glittering charm. Then there comes the guilt trip of knowing someone will be buying you a present therefore you must find a little something to buy that person so that you don’t look like a scrooge or a selfish witch. Here you go: sucked in! Just like my mother is, stressed about keeping up appearances. 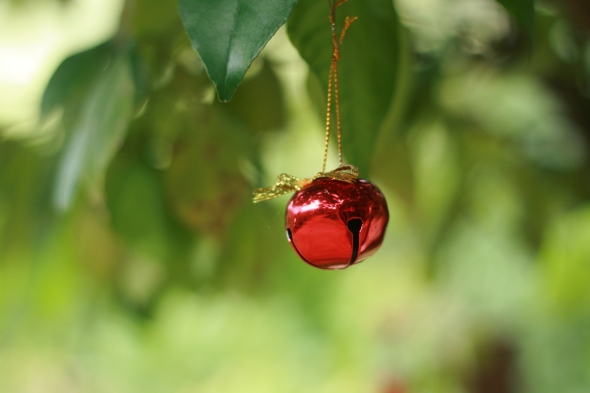 So for me it has been easy up here on our mountain this year. I didn’t hear any Christmas carols, didn’t see too much tinsel and fake snow (which in Ecuador is a retarded decoration choice anyway) and I couldn’t even be bothered to say Merry Christmas and Happy New Year to people. I was in a total Whatever-mode.

However, I usually do take particular care on the importance of finding a slice of time on the last day of the year to recollect memories and make an inventory of the positive&negative things that happened in the year just gone. Like a review at the end of a movie. Revisiting events as if they were ingredients of a 52 weeks soup, to determine which I need more of or less of in the following year.

For some o.c.d. reason, it is with strict rigor that this has to happen on the 31st December (or 1st January at the latest). I suppose if I don’t discipline myself on this punctuality it will never happen.

Well this year one of the first thing I was grateful for that surprisingly popped in mind was Airbnb. Not because we traveled and found lodging through this very popular rented accommodation website, but because we have actually been renting our guest house through it, which gifted me with the sense of traveling without moving. My itchy feet itched somewhat less. 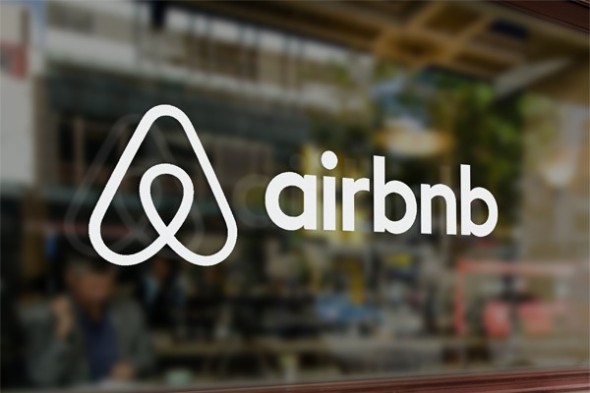 As much as I can be a bit antisocial at times I do genuinely love meeting new people. The crazier the better. Hence why I loved staying in hostels when we were on the road.

Fulfilling our mutual desire to run a hostel ourselves, Fintan and I have started humbly running our small cottage instead. Originally designed to receive our family and friends, our little Cabana Morada ended up welcoming an array of traveling characters as our intended guests got discouraged by its location being too far from Europe.

We’ve had a couple who met through a dating website for ‘spiritual singles’ and chose our lodging as a romantic gateway, another couple who found out they were pregnant in our cabin, an anti-circumcision activist woman, an Anthony Hopkins lookalike with a mighty bum-crack. And over New Year I hosted Daniel, a single American man, retired, on a quest for travelling until he will no long be able to. This man also claimed to be one of the best weed-brownie baker out there. He travelled to us carrying along a big suitcase with a drone in it and some weed he scored in Quito. He decided to bake his infamous brownies using my oven.

I have never been compatible with weed. After many teenage attempts I finally got to know myself enough to understand that Maria Juana and I are not friends and never will be. I get way too paranoid, I usually tend to ride a very fast introspective train that isolates me from company and I lose track on what’s reality and what’s just a distorted view on things.

He came over when Camila had just gone to bed and started whisking these brownies up. The house had the resin smell of weed in its pores. It pervaded my nostrils. He baked them and waited patiently for the tin to cool before cutting a small square off and sampling them straightaway. He was pleased with the result and I was pleased by his pauseless speech that followed, rich of a lifetime stories and a soft Tennessee accent. It must have been 10.30 at night when he decided to retire to his cabin, gently leaving behind a little square of his baked delicacy.

It dawned on me that it was New Year’s eve. And Camila was asleep. And I had watermelon for dinner and didn’t quite know what to do with myself. The quiet emptiness of the situation was begging for my customary review of the year to take place. I decided to cut a sliver off that piece of brownie Daniel left behind on the kitchen counter. Why not? I felt like Alice in Wonderland when she took a bite off the little mushroom piece thinking it so little it would hardly affect her…

Twenty minutes later my mind went off in a thousand directions, thinking so fast my thoughts had become arrows. I got very cold and shivery and wished Fintan was near to tuck me in with a blanket as he usually does. I was able to manage the paranoia this time, which made me feel a lot wiser than back then during my younger attempts. I felt immense gratitude for the people in my life, all popping up in my head in technicolor, snippets of events and conversations were filling my mind like Coca-Cola bubbles. I analyzed them and myself, and each wave of shivers became a symbol of the shedding of a bad behaviour, experience or thought. I wished well to all my people and sent love to everyone. I felt cleansed. Camila awoke, I welcomed her in bed and we cocooned together. It was the sweetest thing. And the faraway fireworks cracked in the distance reminding us of the beginning of a new year.

In the morning a thumping head greeted me. Hello 2016. I was a bit slow but didn’t forget the 9am appointment I had with Daniel to go hiking to the waterfalls, a very popular hike here in Vilcabamba half hour taxi ride from our house followed by a 5-6 hrs hike. Off we went, and I am glad we did. I can’t believe I have lived here nearly 5 years and I hadn’t been there yet. 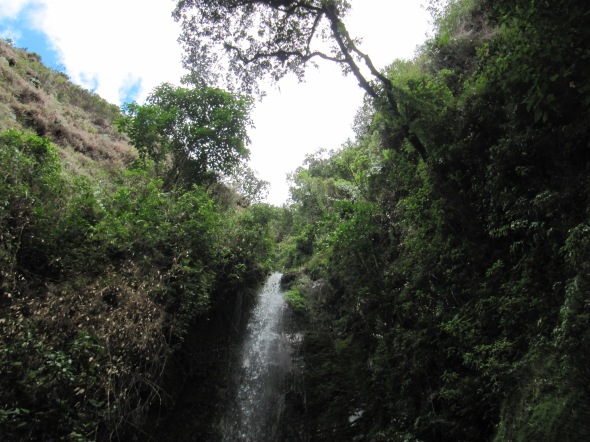 It was a splendid day, it was tough hiking with Camila strapped onto me but nice at the same time. I told Daniel about the 1/9th portion brownie I had compared to his serving and the effects I received.

” It felt like a real therapy, I was a psychologist analyzing myself and saw things from different points of view”

He was eager to hear that I relished it. “Did you enjoy it though?”

I had to think about it, I hadn’t quite worked it out for myself at that point. “Yes, I did. Actually” was my answer.

“Well, you can now on call me Doctor Daniel then” he said.

And off he went the day after conquering Peru, leaving this lovely note behind. 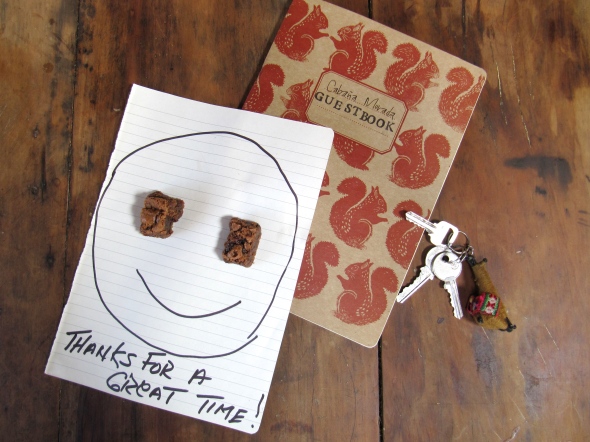 11 Jan This entry was published on January 11, 2016 at 2:09 pm and is filed under Uncategorized. Bookmark the permalink. Follow any comments here with the RSS feed for this post.

Older: Breastfeeding, a year and a half on
Newer: I garden therefore I am